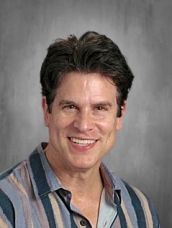 Mr. Bruce has been teaching at Ridgeview since 2001. Prior to that he taught 4th grade in Eagan, MN.

Mr. Bruce earned a business degree at the University of Minnesota-Duluth, where he also played football on scholarship for the Bulldogs. After graduation, he worked in the health/finance industry for 4 years before going back to school to do something he always wanted to do, that being to teach. He enrolled himself in the graduate program at the University of St. Thomas, and had as one of his classmates, Mr. Kaari, who he would later work with at Ridgeview.

Mr. Bruce is a SAG actor who has worked both locally and in LA doing various commercials and shows. Most notably he did a short stint (6 episodes) on the ABC soap All My Children and worked some sketch comedy with Jay Leno on The Tonight Show. Louie Anderson and other judges from the “Z-Film Festival” voted him “Best Supporting Actor” for his role as the rock-star-Edward- (Twilight) like vampire in the short film “Leading Man.” Check him out on IMDB under John Bruce IX.

Always up for an adventure, Mr. Bruce took up rope-climbing in 2015. He has climbed “Long’s Peak” and the “First Flat Iron” both in Colorado. Over the years he taught himself how to play the guitar and joined a rock band. He is currently the lead singer of the Priemere John Mellencamp Experience Band “Rumble Seat.” He restricts himself to 2 performances per month on the weekends. If interested in catching a show, check the band website for concerts. (Rumbleseatband.com)

Mr. Bruce continues to search for different and better ways to teach kids with his co-worker, Mr. Nelson. Mr. Bruce’s goals this year include publishing his first children’s chapter book.